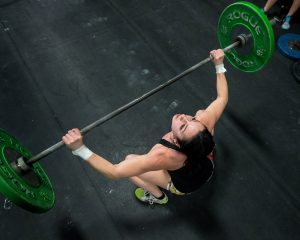 I made up the hashtag #lettdown to laugh at myself. Laughing at yourself is a good thing. It helps you not take life so seriously. But sometimes, it’s not quite so easy to laugh at yourself and let things go.

The picture I have posted with this blog is me failing a snatch for the millionth time. Look how disheartened I am. It’s written all over my face. More on that later.

Failure. F-A-I-L-U-R-E. U-R-E-FAIL. U-are-eh-fail. You are a fail. You failed. You lost. You let fill in the blank down. Disappointment. Embarrassment. No good. Not worthy. Not enough. Foolish. Stupid. Major ego check.

Why are we afraid to fail? Well, I believe it is because we fear experiencing all of the above. The major theme I see to the thread of these thoughts is YOU or really I. ME. We take the word failure and it becomes us. You know when you are doing an ice breaker, and you have to describe yourself in 3 words and suddenly its really hard to do because you’re thinking, “Oh um, #1. FAILURE, uh #2. forgetful, so FAILURE #3. I am goofy, but it’s because I’m clumsy, but that’s because I trip a lot and, oh they said ‘3 words’ so uh, FAILURE.” Why do we think, “I didn’t complete this task, therefore I AM incomplete”?

I don’t want to believe that I am failure, but I do. It is actually one of my core beliefs about myself depending on the topic. In fact, I am so prone to experiencing this avenue of identify theft because I have this complex that I need to excel in everything. I sure do set myself up for disappointment. I also have this powerful tendency in which I am overly thoughtful. In less kinder words, I spazz.

One of my greatest pet peeves, besides bumper stickers, is not doing something because I’m afraid of it. However, I have come to learn I am my greatest enemy. Weapon of choice? Self-sabbatoge. It is true what they say about fear “The only thing to fear is fear itself”. But again, what is fear? Why is it so powerful even when I try to rebel against it the most? That’s because on the other side of fear is something called “doubt”. Now I googled this word to make sure I had it right. “A feeling of uncertainty or lack of conviction.” Used as a verb, “feel uncertain about” and “fear; be afraid of”. There it is. FEAR. Ugh.

If you are a crossfitter, you know what season it is. It is open season. Put your physical fitness to the test because we’re excerisin’ hard today, people! If you participate in the open seriously or for fun, you know the pressure exists. It is not just a test of your body’s stamina, strength, and skill, but also all that of your mind.

17.3 contained my greatest weakness; snatches. Why I chose Crossfit if I like to be great at things, I’ll never know. Okay I do know, I love challenges and I hate being bad at things. How exhausting. I’m actually really good at art, eating cereal, and lying on the couch, but the payoff of Crossfit is probably greater. Probably.

Anyway, the work out yesterday crushed me. I’ll tell you why snatching and olympic lifting are my weakness. It isn’t because I don’t practice form and don’t train hard. It isn’t because it doesn’t come naturally (because it doesn’t). And it is not because I’m coming back from a leg injury. It is because I literally am not confident. As soon as the clock started yesterday and it was my turn to go, I gave way to every insecurity and self-doubt that exists in me. I forgot about what I was doing; load up to the bar, snatch, catch in a squat. On my very first attempt, my only thought was “I’m going to look dumb if I don’t hit this.” and I thought of every single person in a second’s time and what they would think. Naturally, I missed. Cue spazz mode. I couldn’t turn my brain off. I thought about every person standing near me, behind me, and honestly, people who don’t give a damn about me. I projected my insecurity, my desire for approval, and the pressure I put on myself on to other’s thoughts, and you know what I did? I let that fear win. I consider myself a pretty calm and collected person (unless I’m hungry), and I became everything I dislike; an insecure, feels-sorry-for-myself, I-give-up type person. Damn it. I’m not even mad at my score. I’m mad I didn’t do my best. I’m mad at my doubt. I’m mad I’m actually that prideful. I’m mad at me. The truth is that I did fail. But I failed ME.

So here’s the thing. I am going to redo this work out not because my score matters, but because I know I can do it confidently. Well, I want to gain the confidence. Even if my score stays the same, I want to do it for me. Or, maybe tomorrow I’ll wake up, not care, and move on. Listen people, we are human. WE WILL FAIL. We will struggle, we will wrestle, we will win, and we will lose. Working hard at something requires perseverance. You see people around you succeed and its because mentally, they are tough. Don’t let YOU get in the way of YOU. I watched some real strong athletes in our gym throw some crazy heavy weight over their heads. If you are over at Crossfit Grandview, you see the hard work and discipline Joey and Andy put into their training. Maybe they whine about it some days, and maybe they compare themselves and question themselves, but you know what happens instead? When it’s go time, they are determined. I don’t think I saw an ounce of doubt in either of their faces yesterday. In fact, Andy nodded his head in assurance every time he dropped under the bar before he even stood up the weight. I’ll never forget that look of confidence. I want it.

So whatever it is that you might be afraid of, I know I can’t say to you “stop being afraid” and it will go away. But what you can do is not let fear win. It’s a feeling. It’s an uncertainty. It’s doubt. It is an insecurity. That’s okay. Be uncomfortable and face it. If we live in a world in which we are constantly trying to define ourselves, let that definition be by your character. I really believe we are only as good as the things by which we choose to measure ourselves with. So why choose such lowly, worthless measuring tools like a score, an image, or what others might think. Don’t be discouraged, be DETERMINED. Grasp the power of empowerment and maybe laugh at yourself more often along the way. I know I will have plenty of #lettdowns to hashtag in my future so you are welcome to laugh at mine.