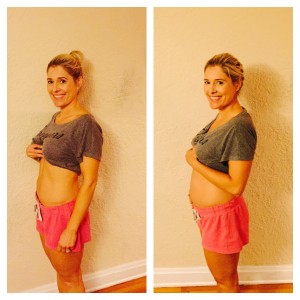 15.5 weeks
I have not written in a while. Life has been a little bit of a roller coaster emotionally for me and I wanted to wait until I had some clarity before I wrote again. I am feeling great physically…no more nausea and I have more energy now. The mental/emotional side has been the grater challenge. It has been a struggle adapting to the changes in my body that have occurred with pregnancy.

I began this journey with an aggressive goal in mind to only gain 20-30lbs during pregnancy. I know that is acceptable and healthy. I have discovered by interviewing multiple mothers who have gained little weight (20-25lbs) and moderate weight (35-40lbs). A trend surfaced: Those mothers who listened to their bodies and let themselves gain moderate weight; got back in shape postpartum quicker than those who continually fought eating. These mothers still ate healthy but had moments where they splurged when they felt they needed more food. It seems the mothers who only gained 17-20lbs had a more difficult time getting back into shape postpartum. Maybe they were “burnt out” of fighting hunger or maybe their body adapted when they didn’t feed it and their metabolism slowed down. Whatever the case is; I have now changed my perspective on this weight gain issue. Women sort of wear low pregnancy weight gain like a badge. “I only gained 20lbs and you couldn’t tell I was pregnant until my 8th month” …….

When it becomes a competition like this, you resort to playing mind games with yourself. “I have only gained 5lbs because the first 5lbs didn’t count and then I didn’t use the bathroom today and I only slept 6.5 hours so I am probably holding 2-3lbs of water weight.” Well I am keeping it real with myself from here on out. It crushes me a little to say it, but I have gained 12lbs since I got pregnant. I started at 137lbs. I did drop to 135lbs once a few weeks later for one day but 137 is my official start. I weigh 149lbs now. I eat healthy everyday, track what I eat 75%-80% of the time, and workout 6 days per week. I am ok with where my body ends up. The road to “OK” has been tough.

It is really difficult to have an expectation of what you will look like or could look like when you are pregnant and then get there and see that reality is different. I was hoping I could be one of those ladies who only gained a belly and kept slim legs and hips. What was I thinking? When have I ever gained weight in my belly and not legs and hips? Never. Somehow I thought this would be different.

I was hoping I could be comfortable in my own skin the entire pregnancy.

This is my wake up call: being comfortable with myself right now has as much to do with learning to love and accept myself at this stage in life as it does taking care of myself by eating right and exercising.
I wanted to determine a formula for working out, nutrition, and sleep that I could rely on throughout my pregnancy. I have discovered that this formula is MEANT to change on a daily basis. Some days I need a lot of food, somedays I don’t need as much but I always need more than I did before.

For a period of 3 weeks I had to hike my carbs up to 43% and my calories to 2225 per day! Now I feel ok on 30% carbs, 40% protein, 30% fat MOST days. Somedays I finsh dinner and an hour later am hungry again. I have ignored that hunger before during pregnancy and gone to bed like I would pre pregnancy. I will wake up 5 hours later ravenous and eat anyway. I might as well listen to my body. It is difficult for me to do that without feeling guilty. Anytime I have just been intuitive with eating as an adult I have gained weight. Sometimes I am better and gain less (usually when I am weighing in daily haha); but mostly I tend to overeat.

This is a struggle to now say to myself, “whatever your heart desires” and not go overboard. I don’t know how to do that.

To give you a little history on why I think I battle this: I grew up with an extremely loving but obese mother. We would go to McDonalds on the way up to my grandparents to have dinner so she would eat less at my grandparent’s house. I could finish a Big Mac and large fry by myself in 5th grade. Other girls had trouble with a cheeseburger and small fry. I grew up overeating. It wasn’t out of sadness or loneliness. It was simply because it was what my family did. My Dad was a farmer and ate large portions because he needed it with his high activity level. He was known for strange late night snacks like a plate full of swiss cheese piled high microwaved with brown sugar on top.

If I was ever hungry; there wasn’t a “wait until dinner”. It was “what do you want”. I am not saying I am a victim. I wouldn’t change my childhood experience for the world. I learned to grow up in a household where instant gratification became a way of life.

Fast forward to high school. I became aware of my body and started to restrict my food intake. I lost 15lbs over 2 months and felt great. I wasn’t overweight before; just not very toned and had a few extra pounds on me. I ran the mile that year the fastest I ever had and my confidence shot through the roof. This began my battle with extremes and food.

Fitness shows I did 10 years later for a period of 8 years (on again and off again) did not help with this extreme behavior. I love a challenge in life. I love to be uncomfortable. I hate mediocrity and complacency.

These can be great attributes when it comes to accomplishments both in my personal life and my career. However, when it comes to long term happiness, a rollercoaster wears you out. I want more peace with myself physically. I have that peace now with my career, personal relationships, and spiritually. I need to establish it with my body. Accepting the bodily pregnancy changes rather than scoffing at the mirror when I walk by disgusted with the image I see. I am fighting a losing battle. Not only will this cause mental turmoil for me now but it will cast a negative shadow on this pregnancy. I do not want to bring a child into a world where his or her mother is worried about her figure so much it interferes with my connection with the baby.

This is easy to say but will be extremely difficult to implement.