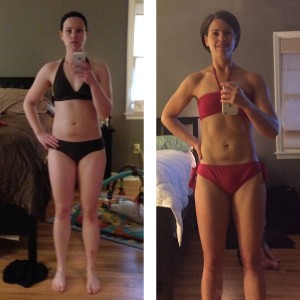 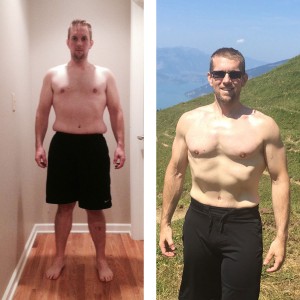 “Like most parents would say, having a child changed our lives. And for us, it included the sobering realization that we are now responsible for setting an example that could impact our son’s habits for his entire life. For us, the biggest change that was needed was nutrition – we needed to get better in this regard to set a better example for him. We had both been overweight children, but managed to keep our weight at a better-but-not-ideal level through extensive exercise during our 20s. But we knew that we weren’t passing any Froning-esque genetics to Elliott, we had to compensate by making sure that we were setting an example that would pass along great habits. Thus began our relationship with Kate.

“We began working with Kate in mid-September, 3 months after Elliott was born. Jess had already achieved her pre-pregnancy weight and was 2 months into CrossFit, but was admittedly not yet near her fitness level pre-pregnancy. And although I had been doing CrossFit for 9 months, I realized that mediocre & inconsistent nutrition was holding back my performance at the gym.

“We both were accustomed to rigorous exercise, so we attempted to approach nutrition with the same gusto. It admittedly wasn’t easy. Although neither of us had horrible diets pre-Kate, we quickly realized that what we were doing was suboptimal – we were eating too many large meals, too few times per day, too many carbs, not enough protein, and way way way too much sugar. The first few weeks were rough – our bodies were detoxing from the sugar and fighting the new diet.

“But relatively quickly that began to change. The first thing we noticed was more energy. Not just at the gym, but in the rest of our lives as well. Suddenly getting by on 5-6 hours sleep was much easier (a very necessary thing with a newborn). At the gym, ‘hitting the wall’ came much later into a workout and was much easier to get over. And our bodies were craving sugar much less once we got it out of our systems, which made maintaining the diet much easier.

“Our goal all along was to not go on a crash diet, but to learn new habits that we could maintain for life and pass on to Elliott. Kurt has lost 20 pounds and Jess lost over 10 pounds, and both maintained those weights for over 6 months since finishing our 3 months with Kate. Although we both still strive to continue improving in both our nutrition and gym performance, we are very happy with where we’re at today – the habits we have gained have been surprisingly easy to maintain. One thing that made it much easier for us was going through the process together. We highly recommend any couples to do this together. It forced us to hold each other accountable and meant that we weren’t surrounded by unhealthy foods that the other kept around the house.

“Even Elliott has gotten involve by adding some kettle bell work to his daily routine! Although his nutrition and physique could still use some work!”